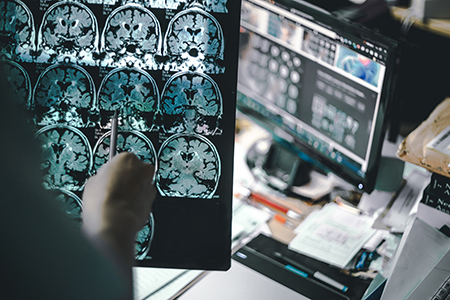 It is estimated that 5.8 million Americans are currently living with Alzheimer's Disease (AD). AD is a progressive, lifelong condition for which there is currently no cure. Treatment consists of managing the symptoms associated with the disease and include medicines that aim to maintain mental function, manage behavioral symptoms, and slow down memory loss1,2.

Many clinical trials are currently active in the study of AD-related drugs. One trial, which is currently recruiting participants, aims to test the efficacy of injecting viral particles carrying cDNA for apolipoprotein 2 (ApoE2). The idea behind this is if this protein can replace a slightly different ApoE variant (ApoE4), which has been highly correlated with the development of AD, symptoms will decrease and disease progression could be slowed.

While AD is a complex and possibly multifactorial disease, one specific gene has been identified as a risk factor for developing the disease. The APOE gene, which has also been linked to the development of cardiovascular disease, encodes for three different protein variants. The gene itself has three alleles and the risk of developing the disease is much different depending on which ones are inherited. All three ApoE proteins are involved in cholesterol transport in the brain:

In the brain, ApoE is synthesized primarily by astrocytes and microglia. Its role in the development of AD involves its influence on the formation of amyloid beta (Aβ) plaques. These plaques are characteristic of AD and contribute to the degradation of neurons. The ApoE4 protein, which is associated with a higher risk of developing AD, has been shown to prevent the clearance of Aβ peptides and promote Aβ aggregation into plaques3. Multiple mouse models with variations in the APOE gene are available to study novel therapeutics for the prevention and treatment of this disease.

"Gene Therapy for APOE4 Homozygote of Alzheimer's Disease" (NCT03634007) is actively recruiting patients that have two copies of the APOE4 gene. The study will assess the efficacy, safety, and toxicity of a viral injection into the cerebrospinal fluid.

This adeno-associated virus (AAV, serotype rh.10) will be used as a carrier for cDNA encoding ApoE2. In 2016, the same group conducting this clinical trial published a preliminary study in mice in the journal Neurobiology of Aging. The team found that three-month-old Apoe knockout (EKO) mice and APOE2 targeted replacement (TRE2) mice with Aβ plaques characteristic of AD showed decreased amyloid burden after injection with viral particles carrying the APOE2 gene variant5. Shortly after, a study was conducted in non-human primates that also demonstrated promising results6.

This study is a clear example of how animal models of human disease can be used to help develop novel therapeutics.