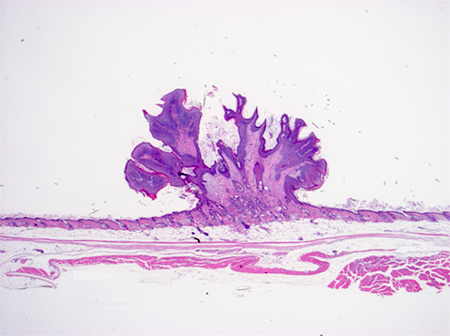 This March, we gathered at the Society for Toxicology's annual meeting in New Orleans, where Taconic Biosciences hosted two talks addressing these key questions. Speakers included Koji Urano from the Central Institute of Experimental Animals in Japan (CIEA) and Marie McKeon of BioReliance Inc. Both speakers highlighted the increased utility of this model and how faster, more accurate nongenotoxic and genotoxic carcinogenicity testing helps pharmaceutical companies with strategic decision making in their drug development pipeline.

Koji Urano introduced the features of the rasH2 model and compared it to the two-year rat bioassay in terms of cost, study duration, and accuracy.

After discussing the model's history, from its development at CIEA to the ILSI/HESI validation in 2000 and increasing adoption in carcinogenicity studies, his talk focused on the quality control measures Taconic and CIEA have in place to ensure consistent quality of the rasH2. The data he presented showed consistently similar carcinogenic susceptibility between the production colonies at Taconic in the US and at the Central Laboratory for Experimental Animals (CIEA) in Japan. His talk also showed data on utility of the rasH2 model for dermal carcinogenic risk assessment, an often discussed application for rasH2.

One remarkable point from her presentation was the low rate of false positives seen in rasH2 mice. False positives remain a common problem in two-year toxicity bioassays. When the incidence of spontaneous tumors is compared (irrespective of type of tumors) between the twenty-six-week rasH2 mouse study and the two year mouse bioassay (B6C3F1 or CD1 mice), it is immediately apparent that 75% to 87% of mice developed spontaneous tumors over the two-year study period, whereas only 23% of rasH2 mice developed spontaneous tumors. Her talk also addressed the common misconception that these transgenic mice are "oversensitive" to developing tumors, which was an initial hurdle in their adoption.

Her presentation concluded with suggestions for using the rasH2 model as part of the Weight of Evidence (WOE) when submitting a Carcinogenicity Assessment Document (CAD) and requesting a waiver of the two-year rat study from drug regulatory agencies.

These SOT sessions were a great prelude to the IQ Consortium webinar on progress toward revision of the ICH S1 Rodent Carcinogenicity Testing guidelines, which included presentations on industry experience with the rasH2 model, the quality of the rasH2 model, and what role this model can play in the future of carcinogenicity testing.