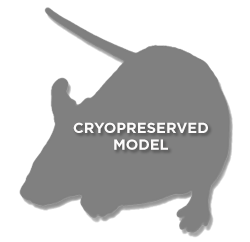 The v-Ha-ras mouse was developed in the laboratory of Philip Leder at Harvard University. The model was created by microinjecting the v-Ha-ras oncogene fused to a mouse zeta-globin promoter gene into FVB zygotes. Taconic received hemizygous male mice from Philip Leder on behalf of the NIEHS in 1988. The mice were mated to inbred FVB females and then derived by caesarean transfer in December 1988. The mice were then backcrossed three generations (N3) to FVB prior to intercrossing hemizygous mice. Frank Sistare of the FDA indentified the responder genotype that correlates with TPA-induced tumor formation in March 1998. This responder genotype is detected by Southern blot using a zeta-globin probe. The hemizygous responder mice are maintained by backcrossing proven homozygous responder TG.AC mice to FVB mice. Homozygous mice were transferred in July 1997 to maintain continuity to the NIEHS Foundation Colony.

Occasionally, it becomes necessary to discontinue live production of Taconic Transgenic Models™ due to lack of interest. The v-Ha-ras mouse is one such model. Live production of this model ended in 2011. If you have a need for this model, please contact us to discuss available options.