Please accept our sincere gratitude for making Insights so widely read. It has been a delight providing these informative articles over the past few years. Please indulge us as we take a break from our standard format for this year-ending Insight. 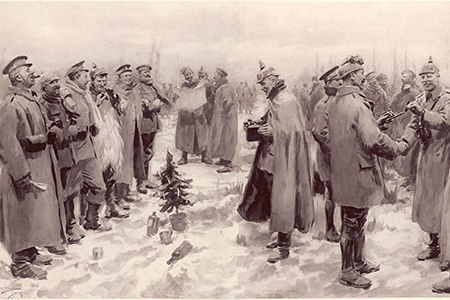 What will you do as we near the end of the year? It's the time when many take time off to celebrate religious and cultural holidays. It is a time to spend with family and friends. It is a time to reflect on what has happened over the past year. It is a time for rest before we gear up for next year.

Downtime and relaxation help us better prepare for what is ahead. But how do you take a respite in these turbulent times? How do you rest knowing what you may be facing in the coming year, whether personal or professional? Remember that chaotic and stressful times can be a crucible for innovation.

The war to end all wars — World War I (WWI) — ended 101 years ago. The armistice was very important as it ended hostilities and allowed nations to move on and heal. I recommend watching the film Joyeux Noel (2005) while on break this holiday season. It details the story of an unlikely truce that even Pope Benedict XV could not convince the French and German governments to enact. Spoiler alert — the French, Scottish, and German troops take it upon themselves to declare a truce — a recess from the bloodiest war in history up to that time, as there were over 10 million military deaths in WWI. On December 25, 1914, 105 years ago, an informal Christmas truce was declared up and down the trenches of the Western Front. During this truce, soldiers exchanged small gifts of chocolate, champagne, and photos of loved ones.

They sang Christmas carols and celebrated Mass. Unfortunately, this truce was short-lived, and the hostilities began again towards the end of Christmas Day.

We can only wonder what the conversations were during that brief ceasefire. I'm sure most of the conversation related to missing families and home. Perhaps, for those few who could speak both French and German, there were more in-depth discussions about the war and what good would come of it. As it turns out, many medical breakthroughs developed during or as a result of WWI. Some of the most well-known researchers in the scientific and medical communities served during the war and were influenced by what they saw.

With the development of new weapons, medicine and treatment advanced as well. 70% of injuries and deaths in WWI were due to mortar shells, which caused new pathologies and types of wounds. WWI was the first conflict where the number of deaths from wounds outstripped those from disease1,2.

Some of these treatments are so routine today that we can't imagine a time when they did not exist.

Mobile ambulance services arose as an outcome of the battle of Marne in September 1914 when 500 injured soldiers were unloaded off a train and left in the rain. US Ambassador Myron T. Herrick encouraged friends and staff with cars to transport injured soldiers to nearby hospitals. This act served as an inspiration to use modified vehicles to transport wounded soldiers from battlefronts to medical help more quickly.

Up to 70% of post-trauma infections resulted in the amputation of limbs rather than treatment of the wound itself. Clostridium perfringens, which causes the rapid necrosis known as gas gangrene, was often the bacteria causing these infections. To address these infections, doctors across Europe adopted the Carrel-Dakin method during the war. Drs. Alexis Carrel and Henry Dakin developed a solution of sodium hypochlorite that would kill the bacteria without burning the nearby flesh. This treatment eliminated the infection and allowed surgeons to perform the necessary procedures to repair injuries.

George Crile introduced a method of anesthesia that he and Agatha Hodgins had developed in Cleveland. When Crile arrived in Europe, he brought with him 18 large cylinders — 3,000 gallons — of nitrous oxide. He performed surgical demonstrations using a nitrous oxide-oxygen mix, which was enough to put a patient to sleep but not into a state of shock. This anesthesia allowed doctors to operate without causing pain to patients.

Less toxic, morphine-derived anesthetic agents were also developed during this time, as well as new instruments to deliver anesthetics to patients. The Camus and the Ombredanne ether inhalers were pervasive in anesthesiology during WWI.

In 1914, Marie Curie joined the Union des femmes de France and with the help of the Red Cross, installed X-ray machines in hundreds of vehicles enabling the imaging of wounds close to the battlefront. These radiological ambulances became known as "petite curies." By the end of the war, over 1 million soldiers had X-rays of their injuries.

Epidemics were one of the leading causes of death in WWI. In March of 1914, vaccination against typhoid became mandatory for all French soldiers, saving over 20,000 lives. The tetanus vaccination saw widespread use after development for Canadian soldiers as well.

Before WWI, most blood transfusions were achieved through the direct connection between donor and patient. However, this procedure was impractical on or near the battlefront. In 1914 Belgian Dr. Albert Hustin developed the method of preserving blood through the addition of citrate to collected blood. This method allowed transportation and administration of blood closer to the front.

The development of skin and bone grafts helped treat facial injuries sustained during trench warfare. While today plastic surgery is often associated with cosmetic surgery, in WWI it was vital in saving lives and returning soldiers to productive lives after the war.

The Thomas splint was implemented at the Western Front in 1916 and subsequently reduced the rate of mortality from certain fractures from 80% to 20%3.

Notable scientists who served in WWI

In addition to the medical breakthroughs that came out of WWI, there were many distinguished scientists that served in the war as well:

While we would never wish to have a war as an impetus for innovation, it seems that WWI did serve that purpose. So, as we end 2019, take some time to rest. And as we head into 2020 don't be discouraged by turbulent times; let them be an impetus to innovate and bring much-needed respite to those who suffer from disease and injuries.

1. The Atlantic. How World War I Revolutionized Medicine: Advances during the "first mass killing of the 20th century" have saved countless lives since. (Accessed Dec 9, 2019).