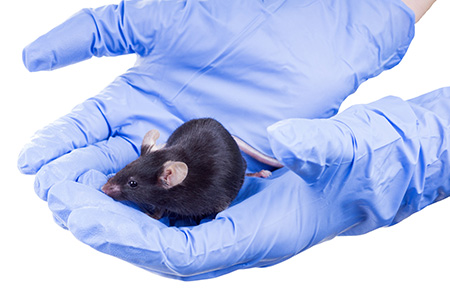 Segmented filamentous bacteria (SFB, provisional classification Candidatus Savagella) are commensal microorganisms endemic to all vertebrate classes, including mice and humans. SFB are notable for their ability to modulate adaptive host immune responses, including induction of regulatory Th17 T cells, Peyer's patch maturation, and gut IgA production1-3. A recent study from the laboratory of Joyce Wu at the University of Arizona has revealed a novel innate immune function for SFB to regulate neutrophil responses and protection from pneumococcal pneumonia4.

In this study, the authors showed that the presence of SFB is protective in immunodeficient Rag-/- mice, but not in immunocompetent C57BL/6 mice, in response to Streptococcus pneumoniae infection. Since Rag-/- mice lack T and B cells, this protective role for SFB is independent of adaptive immune responses.

The presence of SFB was associated with reduced neutrophils in the lungs of S. pneumoniae-infected Rag-/- mice, but not other innate cell types, and these neutrophils expressed markers corresponding to a switch from a pro-inflammatory to a pro-resolution phenotype. These novel observations show that SFB can regulate systemic innate responses and extend our knowledge of the numerous mechanisms through which SFB modulates host immune responses.

SFB in In Vivo Preclinical Research

SFB is neither a pathogen, nor an opportunist. However, the complex immunomodulatory functions of this commensal organism can have dominant effects on the performance of numerous mouse models, particularly for infection and inflammation (e.g. colitis, experimental autoimmune encephalomyelitis, autoimmune arthritis and autoimmune diabetes). For certain models, SFB may be desirable, while for others it can be detrimental, depending on the desired outcomes. However, in all cases, it is recommended to control for this by knowing the SFB status of your research animals.

Since SFB is not a pathogen, routine testing for this organism is generally not performed by either animal vendors or research institutions. Taconic Biosciences is one exception in this regard, and Taconic provides SFB testing for all of its commercial animals and offers Health Standards that specifically exclude SFB. SFB-negative C57BL/6 mice are available under our Excluded Flora Health Standard. SFB-positive animals can also be obtained from Taconic; however, it is recommended that cage-level testing be performed to confirm the presence of SFB in individual animals.

A common misconception is that mice from other animal vendors are negative for SFB; however, it is impossible to ensure this in the absence of testing, and both SFB-positive and SFB-negative animals have been identified from other providers5.

Outside of animal vendors, it is important to recognize that SFB may be common in many research institutions. For those investigators who would like to test their own research colonies, IDEXX BioResearch does offer a PCR screening test for SFB.

The Translational Importance of SFB

There is a growing appreciation for the role of the commensal microbiome, including SFB, in regulating health and disease. Unlike humans and wild mice, laboratory mice have a relatively underdeveloped immune system due to limited microbial diversity and pathogen exposure6. SFB offers one example of how a specific non-pathogenic agent can modulate the laboratory mouse immune system.

SFB is likely widely present in the human population and has been detected in ileal biopsies7. Although its presence or absence has not been associated with clinical conditions, it would not be surprising if SFB had an impact on human health given the wide number of adaptive and innate immune mechanisms regulated by SFB in mice. Incorporating SFB into experimental planning should consider not only its impact on model performance, but also its translatability to patients.