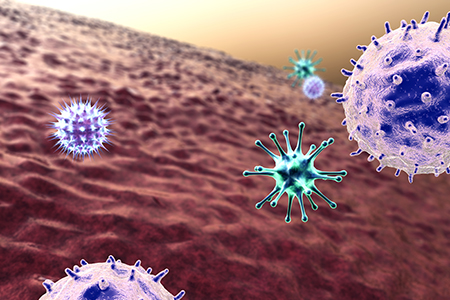 For the first time, a team of scientists reproduced clinical responses to adoptive T-cell transfer in a rodent model of metastatic melanoma. This could support more accurate preclinical evaluation of novel immunotherapy agents.

Although rodent models are extremely useful tools for preclinical evaluations of immunotherapeutics, they fail to recapitulate the durable response to immunotherapy that has been observed clinically. A model capable of capturing this specific clinical biology could enable improved preclinical evaluations of tolerability, dosing schedules, and synergistic efficacy for an array of combination-therapy approaches. Furthermore, reproducing clinical responses to immunotherapy in a rodent model could enable prospective screening for immunotherapies prior to their administration to individual patients.

TILs Do Not Cause Tumor Regression in Nog Mice

Formation of an immune-suppressive environment within the engrafted tumor is one explanation for this limited response to ACT. Consistent with this hypothesis, the immune checkpoint, PD-1, was highly expressed in TILs following ACT, while it was minimally expressed in the TILs prior to injection into NOG mice.

Despite this indication of a suppressive environment in the engrafted tumors, treatment with anti-PD-1 antibody (pembrolizumab) did not result in subsequent tumor regression, suggesting lack of some other crucial factor for future investigation.

IL-2 is Essential for Tumor Eradication in NOG Mice

The ACT protocol applied to NOG mice in Dr. Nilsson's study included simultaneous administration of recombinant human IL-2 (hIL2), a cytokine that contributes to T-cell expansion and is routinely provided to boost the immune response in patients undergoing ACT. When Dr. Nilsson's team measured hIL2 levels in NOG mice resulting from its subcutaneous administration, they observed that the cytokine was rapidly cleared from circulation. This result suggested the possibility that a single hIL2 injection was insufficient to stimulate the desired ACT-mediated tumor regression in the model. 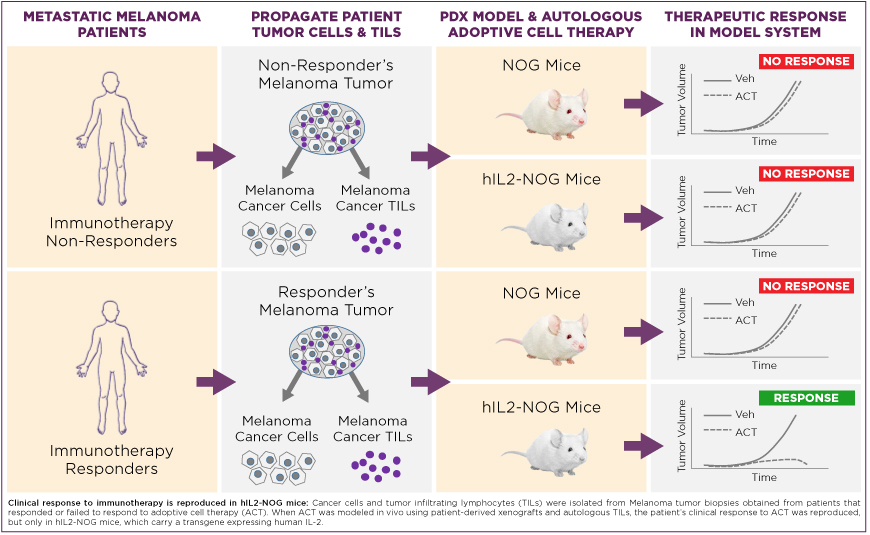 ACT using metastatic melanoma and TILs from responders lead to tumor regression in the hIL-2 NOG model, whereas no tumor regression was observed in hIL-2 NOG when non-responders' cells were used. These results differed remarkably from those in non-transgenic NOG, wherein ACT failed to mediate tumor regression even if tumor cells and autologous TILs from a responding patient were applied (Figure 1).

Further supporting a crucial role for hIL2 in mediating tumor regression, the investigators found that metastatic melanoma tumor regression could be achieved in non-transgenic NOG mice if a responder's cells (TILs and tumor) were used and hIL2 is continually supplied through repeated dosing.

Dr. Nilsson's work in NOG and hIL-2 NOG mice is the first to recapitulate donor-specific clinical responses in a rodent model engrafted with human tumor cells and autologous immune cells. The results provide proof-of-concept for a novel PDX model that should enhance preclinical immunotherapy evaluations, predict responses to ACT, and support development of novel immune therapies.