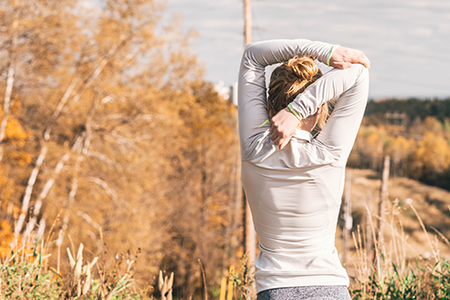 A recent study published in Nature Medicine reports on the correlation between rigorous exercise and the increase in abundance of a specific bacterial genus in the human gut microbiome. The collaborative group, which includes CRISPR-researcher George Church from Harvard Medical School, established a connection between the abundance of Veillonella atypica and an increased ability to tolerate fitness1.

This article adds to the growing evidence that the microbiome can influence not only disease progression and gastrointestinal conditions but also normal physiological processes and biological development.

The microbiomes of athletes have been found to contain different compositions of bacterial species when compared to sedentary controls. Specifically, the family Veillonellaceae and genera Bacteroides, Prevotella, Methanobrevibacter, and Akkermansia have been shown to be present in higher levels in athletes2,3. To investigate the relative abundance of bacteria in marathon runners, the researchers obtained stool samples from fifteen participants one week before and one week after running in the 2015 Boston Marathon. Stool samples were also obtained from ten sedentary controls. Upon conducting 16S rRNA gene sequencing, it was apparent that the genus Veillonella was the most differentially abundant bacteria when comparing pre- and post-exercise samples.

Bacterial strains in the genus Veillonella obtain all of their carbon solely from the catabolism of lactate into the short-chain fatty acids acetate and propionate4. Lactate is generated by muscles during intense exercise and can be broken down by multiple pathways.

To determine whether the increased abundance of Veillonella would increase tolerance to exercise through the increased metabolism of lactate, two groups of mice were orally gavaged with two different bacterial strains and subjected to treadmill-running tests. In the control group which was orally-gavaged with Lactobacillus bulgaricus, a bacterium that cannot breakdown lactate, there was a significant difference in the amount of time they were able to run. The experimental group which had been gavaged with Veillonella atypica was able to run for 13% longer on average than the control group.

Data from the marathon runners as well as mouse studies provides the basis for a connection between the gut microbiome and enhanced athletic performance.

The alteration of the gut microbiome due to increased physical fitness has also been reported on by other groups. Specifically, a study conducted in competitive cyclists demonstrated that specific genera and gene transcripts were upregulated in those of a higher fitness level3.

To obtain stool samples for subsequent analysis, thirty-three cyclists were recruited and categorized based on the USA Cycling racing classes of competitive cycling. Twenty-two cyclists in the study were categorized as professional-level racers, while eleven were classified as amateur racers, and all study participants were required to exercise for a minimum of six hours per week.

After metagenomic and metatranscriptomic analysis, the researchers found low abundances of Bacteroides in all athletes. In contrast were the levels of Prevotella, which were present in higher relative abundance in the cyclists that exercised for more than eleven hours per week.

While more studies have been conducted in murine research models than humans to date in this specific research area, there is great promise with advances in sequencing and genomic analysis to conduct more future studies with human participants. Both studies mentioned here — the study in competitive cyclists from 2017 as well as the study in marathon runners from 2019 — highlight the growing evidence that exercise is a modulator of and affected by the human gut microbiome.