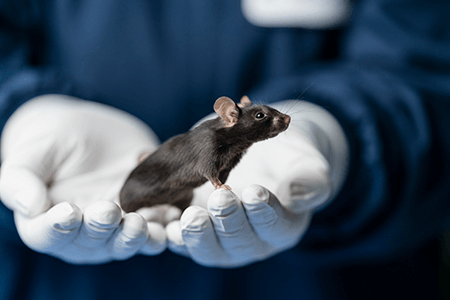 Drugs targeting immune checkpoint inhibitor pathways have shown tremendous promise in treating various types of cancer and have been highly effective in a number of patients. However, for a subset of cancer patients this new type of treatment approach has failed to work. Recently, a series of landmark studies demonstrated that the efficacy of immune checkpoint inhibitor therapies is dependent upon the presence of specific gut bacteria1-3. However, despite these key findings, the precise molecular mechanisms for how certain bacteria promote beneficial responses to this type of therapy have not yet been described. Mager et al. show that microbiome-derived inosine modulates the response to checkpoint inhibitor immunotherapy and describe a new pathway that may be leveraged to develop novel therapies4.

Identification of bacteria that promote responses to checkpoint inhibitor therapy

Identification of inosine as a bacterial metabolite modulating immunity

Interestingly, the researchers were unable to isolate B. pseudolongum from the MC38 tumor model despite it originally being isolated from a tumor induced using the AOM/DSS CRC model, and suggested the possible involvement of soluble factors. To determine if a soluble factor was being produced, serum from mice monocolonized with B. pseudolongum and treated with anti-CTLA-4 antibody was transferred into tumor-bearing germ-free mice. The researchers found that serum alone sourced from B. pseudolongum colonized mice was sufficient to reduce tumor growth and to elicit strong anti-tumor immunity in both the tumors and spleens of recipient mice.

To identify the responsible substance(s), Mager et al. performed a metabolomic analysis and discovered that the purine metabolite inosine was the only metabolite that was signficantly increased, and present at 8-9 fold higher levels than observed in control mice. An analysis of bacterial culture supernatants confirmed inosine production in B. pseudolongum cultures. To determine in vivo levels of inosine, they measured inosine concentrations in the duodenum, jujeni and cecum of B. pseudolongum monocolonized mice and found that bacterial production of inosine was elevated in the upper GI tract of colonized mice.

Intially, the researchers were surprised at the identification of inosine as a modulator because of its binding to the adenosine 2A receptor (A2AR), which has been demonstrated to inhibit Th1 differentiation and in vivo anti-tumor responses5,6. However, they found that the ability of inosine to drive these beneficial T cell responses was dependent upon the presence of interferon-gamma (IFN-γ). Using an in vitro culture system, they showed that significantly higher number of naïve T cells differentiated toward a Th1 phenotype in the presence of inosine, and only when extrageneous IFN-γ was also present. They also clearly demonstrated that this effect was mediated through A2AR as when an inhibitor of A2AR signalling was added to the culure the ability of inosine to drive Th1 reponses was abrogated.

Armed with knowing that A2AR was critical to the response imparted by inosine, the researchers next looked to assess the role of A2AR in vivo. Germ-free Rag1 knockout (KO) mice were monocolonized with B. pseudolongum and had either A2AR deficient or wild-type (WT) T cells adoptively transferred within them followed by injection with MC38 tumor cells. Once palpable tumors developed, mice were administred ICB therapy. Following therapy, tumor growth was significantly higher in the monocolonized mice that received A2AR KO T cells demonstrating the need for A2AR signaling in this model.

Having shown that inosine signaling requires the right environment (i.e. IFN-γ) to drive Th1 T cell responses, the researchers next evaluated the effects of adding a CpG adjuvant to their therapy regimen. CpG is a widely used anti-tumor adjvant in different settings7. Germ-free mice were injected with MC38 cells and treated with different combinations of inosine and CpG administration to evaluate their ability to impact anti-CTLA-4 treatment. Groups of mice that received inosine (administered orally or systemically), CpG adjuvant and anti-CTLA-4 consistenly displayed the lowest levels of tumor growth and highest levels of intratumor CD4 and CD8 T cells expressing IFN-γ. Conversely, in the absence of CpG, inosine administration led to higher tumor weights and reduced levels of T cell activation.

Having identified the optimal signals needed to complement ICB therapy, Mager et al. confirmed these results by revisiting their germ-free adoptive transfer model. Germ-free Rag1 KO mice were transplanted with T cells from either A2AR KO or WT donor mice, and then challenged with MC38 tumor cells. After tumor development, mice were treated with a therapy comprised of anti-CTLA-4 antibody, CpG adjuvant and inosine. Mice receiving WT T cells showed a significant reduction in tumor growth compared to those receiving KO T cells, and displayed higher levels of intratumor T cells expressing IFN-γ. To evaluate if inosine could promote an immunotherapy response in other cancer models, the investigators evaluated their treatment regimen for anti-tumor responses using additional models for intestinal cancer, bladder cancer and melanoma. In each model, mice receving a treatment regimen of anti-CTLA-4, CpG and inosine displayed significantly lower tumor weights and higher levels of anti-tumor T cell responses compared to animals that received a regimen not including inosine.

Mager et al. significantly build on the previous work of others demonstrating that the microbiome impacts responses to ICB, and identify three bacterial species with beneficial effects on checkpoint inhibitor therapy. Through their work they have identified another novel immune pathway directly impacted by bacterial metabolites. Futhermore, these data demonstrate that approaches aiming to alter the composition of patient microbiota or strategies targeting the identification or development of small molecule-based therapies derived from the microbiome could be utilized to increase the efficacy of cancer therapies targeting immune checkpoints.