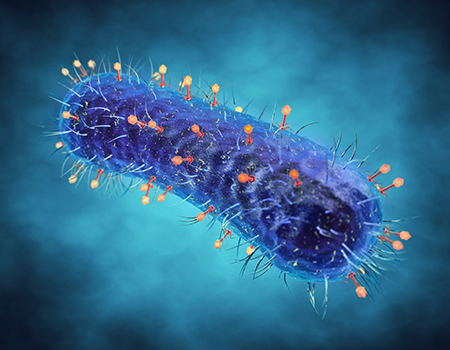 Multi-drug resistant (MDR) bacterial infections have been on the rise for decades, forcing researchers to investigate alternatives to antibiotic treatments. Phage therapy, a century-old technique that utilizes viruses to attack bacteria, has therefore gained interest in the last few years as a potential alternative treatment for MDR infections.

Advancements in next-generation sequencing and bioengineering have enabled the development of this type of precision anti-bacterial therapy that can target and destroy resistant bacterial species without harming commensal microbiota. 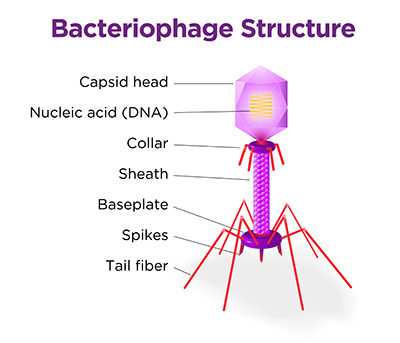 Bacteriophages, commonly referred to as phages, are viruses that can only infect bacterial and archaeal cells. The outer shell of the phage is composed of various proteins, with the capsid head protecting the viral genome inside. Some phages have minimal genomes, encoding as little as four proteins, while others can contain hundreds of genes.

Following attachment to the outside of a bacterial cell, the phage creates a hole in the plasma membrane and injects its genome into the cytoplasm. Depending on the type of phage, either lytic or lysogenic, two different pathways can result:

Before the advent of antibiotics, phage therapies were commonly used in central and eastern Europe. While antibiotics soon became the gold standard for treating bacterial infections by the 1950s, the rapid increase in MDR bacteria has led researchers to look for alternative treatments.

The ability to sequence bacterial and viral genomes using next-generation sequencing machines revived interest in phage therapy in the US. In 2010, researcher Graham Hatfull, from the University of Pittsburgh, created the Actinobacteriophage database, which is an online resource with thousands of sequenced bacteriophages that could potentially be used in phage cocktails to target MDR bacteria3.

Advantages and Disadvantages of Phage Therapy

Phages are much more specific to their bacterial targets than antibiotics. This is beneficial during treatment because the phages will not be able to harm any other bacterial strains other than the one they are targeted to, leaving beneficial gut bacteria unaffected4.

However, this same specificity can also present a potential disadvantage. A phage will only recognize and lyse a bacterial cell that is of a specific strain. To address this, multiple phages are usually mixed into a "phage cocktail" to improve the chances of treatment success. While these cocktails are not available commercially in the US, they are sold at pharmacies in eastern European countries such as Russia and Georgia5,6.

When used as a treatment phages are usually applied topically or directly to the site of infection. The phage-based treatments available in Georgia include physical wound covers as well as powders that can be applied to a specific area.

While phage therapies may be very common in the east they are catching on more slowly in the US.

In 2015, a collaboration of researchers successfully treated a case of MDR Acinetobacter baumannii using personalized phage therapy in a 68-year-old diabetic patient with necrotizing pancreatitis7. In early 2019, the FDA approved the first clinical trial of an intravenously administered phage therapy for the treatment of Staphylococcus aureus infections8.

Most recently, an international team of researchers published a paper in Nature Medicine on the successful treatment of a disseminated drug-resistant Mycobacterium abscessus in a seriously-ill fifteen-year-old with cystic fibrosis9. Part of the team was researcher Graham Hatfull (mentioned earlier), who created a phage cocktail consisting of three different phages that were all predicted to target the specific bacterial strain present.

Within 72 hours of the first infusion of the phage cocktail the patient's bacterial sores began to dry up. After six more weeks of treatment the patient's infection was essentially eradicated. While this case represents only one successful phage therapy in the US, it is likely that more academic and pharmaceutical researchers will be investigating phage therapies in the near future.