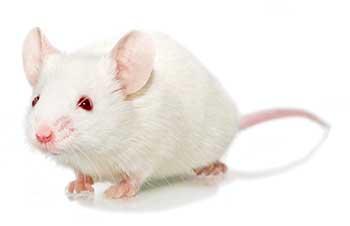 The CIEA NOG mouse® was developed by Mamoru Ito of the Central Institute for Experimental Animals (CIEA) in Japan. The Prkdcscid mutation was identified by Mel Bosma of the Fox Chase Cancer Center in a C.B-17 congenic mouse population. This mutation was backcrossed onto the NOD/ShiJic strain at CIEA for at least eight generations. The Il2rg targeted mutation was developed by Dr. Kazuo Sugamura of Tohoku University by targeting the gene in ES cells derived from a 129 strain. Targeted ES cells were injected into C57BL/6 blastocysts. Resultant chimeras were backcrossed onto the C57BL/6JJic background for at least eight generations. The CIEA NOG mouse® was developed by backcrossing the C57BL/6JJic-Il2rg line to the NOD/ShiJic-Prkdcscid line for a total of eight generations. The B2m gene was knocked out via CRISPR-mediated knock-in of a nonsense mutation into exon 1. This mutation was made directly in the NOG strain.

The CIEA NOG mouse® is produced and distributed under license rights to the following patents and trademarks:

Conditions of Use specific to models generated using CRISPR/Cas9
This Model was generated using CRISPR/Cas9 technology. Taconic uses CRISPR/Cas9 technology to generate and/or distribute gene-edited models under licenses from The Broad Institute, Inc., the Massachusetts Institute of Technology, the President and Fellows of Harvard College, the University of Iowa Research Foundation and ERS Genomics. View the full list of licensed patents: B2m-NOG mice at 6-11 weeks of age were engrafted with varying doses of human PBMCs via tail vein injection. Engraftment was assessed weekly by flow cytometry of peripheral blood samples and is expressed as human CD3/mouse CD45. 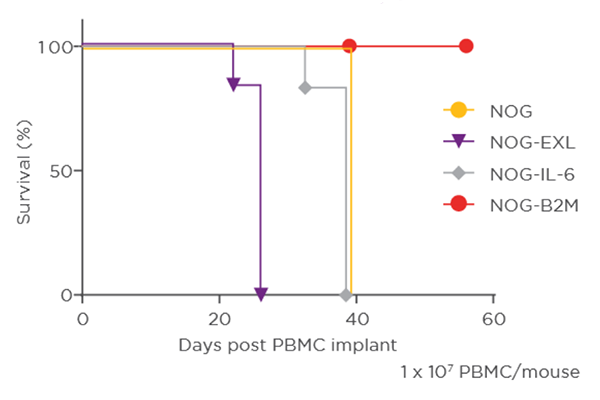 NOG and B2m-NOG mice at 6-11 weeks of age were engrafted with 1 x 107 human PBMCs from a single donor via tail vein injection. Mice were monitored for signs of xenogeneic Graft vs. Host Disease for up to 8 weeks post engraftment. Data is shown in the Kaplan-Meier survival curve to represent proportion of mice exhibiting xenogeneic GvHD-free survival for the study duration by group (N=6/cohort). (P<0.001, Log rank Mantel-Cox test). 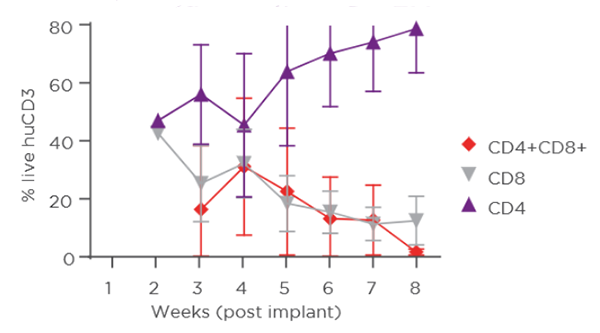