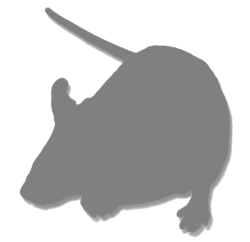 The Tcrα Knockout/Transgenic LCMV P14 T Cell Receptor line is homozygous for a transgene that encodes a T cell receptor that is specific for a peptide (P14) from the lymphocytic choriomeningitis virus (LCMV) presented by the MHC class I molecule H-2Db. It is also deficient in the Tcrα gene and therefore does not develop endogenous mature TCR alpha beta cells. Almost all the peripheral T cells are CD8+ and express the transgenic TCR. The mice are useful for in vitro studies of CD8+ T cell activation and differentiation to cytotoxic lymphocytes and as a source of donor cells for adoptive transfer into B6 mice for in vivo studies of inflammation, tolerance and anti-viral responses. In contrast to model 4113, which expresses the TCR transgene on a Rag2-/- background, these mice express normal numbers of B cells and TCRγδ T cells.

The Transgenic LCMV-P14 T Cell Receptor transgenic mouse was made by Dr. Hanspeter Pircher and colleagues in 1989 at the Department of Experimental Pathology in Zurich, Switzerland. The transgenic line was created by coinjection of the P14 Tcrα and Tcrβ gene constructs into (C57BL/6 x DBA/2)F2 fertilized eggs. The male founder 327, who had 10-20 copies of both transgenes integrated onto the same chromosome, was crossed to a C57BL/6 female. The line was subsequently backcrossed to C57BL/6 up to N10 and then intracrossed to establish a homozygous line. These mice were brought to Taconic in May of 1997 by Dr. B.J. Fowlkes and embryo transfer-derived into the NIAID colony. In 1998, this strain was crossed twice to TCRa targeted mutation mice (B6.129S2-Tcratm1Mom N12). The Tcra knockout line was developed in the laboratory of Dr. S. Tonegawa by Dr. P. Mombaerts in 1992 by targeting in 129S2/SvPas-derived D3 ES cells and subsequently backcrossed to C57BL/6 12 times. After the second cross to the Tcra -/- strain, mice homozygous for the Tcra mutation were selected by looking for the disappearance of endogenous CD4+ T cells using FACS analysis. The line was then bred to obtain mice homozygous for the transgene followed by selection using test crosses and FACS analysis to identify mice exhibiting high levels of expression of the Vβ 8.1, Vα 2 transgene.