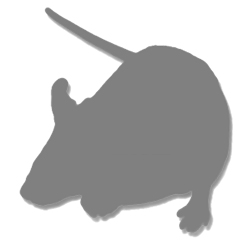 The Rag1 Knockout/Transgenic OT-I T Cell Receptor line is homozygous for a transgene that encodes a T cell receptor specific for chicken ovalbumin 257-264, presented by the MHC class I molecule H-2Kb. It is also deficient in the Rag1 gene (recombinase reactivating gene 1) and therefore does not develop mature T or B cells expressing endogenous receptors. Virtually all peripheral CD8+ cells express the transgene. These mice are useful as a source of homogeneous donor CD8+ T cells for in vivo adoptive transfer studies to investigate T cell development, activation, memory, and tolerance. They can be used in conjunction with CD4+ T cells from the Rag2 Knockout/Transgenic OT-II T Cell Receptor line, which are specific for chicken ovalbumin 323-339, presented by the MHC class II molecule H-2 I-Ab, as a pair of helper and CTL T cells reactive against the same antigen.

The OT-I microinjected model was developed by Dr. Francis Carbone of Monash Medical School and Dr. Michael Bevan of the University of Washington. The model was generated by injecting the rearranged T cell receptor Vα2-Jα26 (under the control of the alpha chain promoter and enhancer) and Vβ5-Dβ2-Jβ2.6 (under the control of the MHC class I promoter and the Ig heavy chain enhancer) into B6 x B6.C-H2bm1 blastocysts. Founders were subsequently bred to C57BL/6J mice for 9 generations. The line was later transferred to NIAID from Dr. Kristin Hogquist of the University of Minnesota and rederived by mating OT-I source males to C57BL/6NAi females. The transgenic mice were crossed twice to a homozygous C57BL/6J-Rag1tm1Mom knockout mouse which had been backcrossed 10 generations to B6/J (Mombaerts P, Cell 1992;68:869-877), and Rag1-/- offspring were selected. These mice were then intercrossed and OT-I TCR positive mice homozygous for the transgene were identified by test mating them to wild type partners and selecting animals that only gave rise to transgene positive offspring.

This model is unavailable.