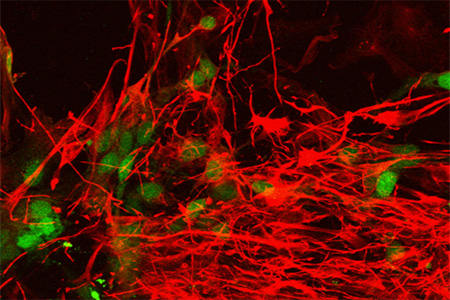 Tbk1 was known as a regulator of the innate immune system, but its specific in vivo roles were difficult to ascertain due to the reported embryonic lethality of a null mutation. Knockdown and over expression studies confirmed Tbk1's role in regulating the immune system, but more precise mechanistic studies were needed. In 2012, Jin et.al. used a conditional Tbk1 model to reveal a new and exciting role for Tbk1 in IgA class switching2. The group was interested in studying the in vivo function of Tbk1 in regulating humoral immune responses. To create a B-cell specific ablation of Tbk1 function, they crossed the conditional Tbk1 line to CD19-Cre mice. They were able to determine that the B cell-specific KO of Tbk1 did not affect B cell development or maturation and therefore allowed the study of Tbk1's role in B cell activation and differentiation. This use of the conditional Tbk1 mutants led to the surprising discovery that Tbk1 plays a role in the control of IgA class switching. Tbk1 was found to inhibit IgA class switching by opposing the signals from tumor necrosis factor (TNF ) family members. This remarkable discovery in a complex, multi-step process required the use of a suitable animal model.

The functions of the Tbk1 gene have been an active area of research for many years. As we have seen, more recent studies have precisely defined Tbk1's role in innate immunity using a reverse genetic approach (gene to phenotype). Of course, another way to approach defining gene function is by analyzing existing phenotypes and determining the causative mutation(s). With the advent of high throughput, low cost whole genome sequencing, this forward genetic approach is proving to be increasingly powerful. This year, a new role for Tbk1 was defined opening up an entirely new area of research.

With new studies implicating new roles for Tbk1, Taconic Biosciences offers two conditional Tbk1 mouse models that can be used to advance your research around the mechanisms of motor neuron degeneration and ALS. As part of the Knockout Repository, for-profit and nonprofit entities can access model TF3033 which represents a conditional mutation of Tbk1. This line has the first coding exon (exon 2) flanked by loxP sites and allows the generation of tissue or cell specific null mutations. In addition, nonprofit researchers can access the GEM Collection model 11131 which is another conditional mutation of the Tbk1 gene that has exons 5 and 6 flanked by loxP sites. Regardless of which line best suits your needs, either can be recovered quickly from the frozen archive with heterozygous cohorts typically available within 16 weeks of recovery.