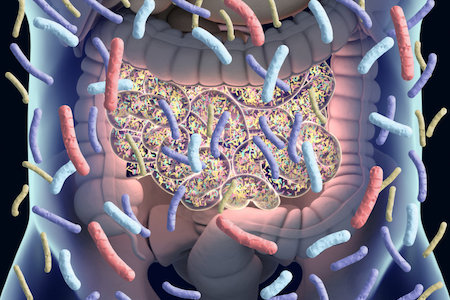 In this study, the authors aimed to evaluate if bacterial metabolites of bile acids possess biologically active functions. Primary bile acids are synthesized by the liver and secreted into the small intestine by the gall bladder to aid in the digestion of dietary fats. Approximately 95% of secreted bile acids are recycled following reabsorption and transport to the liver3. However, some remaining bile acids are metabolized by gut microbiota giving rise to secondary bile acids. Previous research has shown that microbial fermentation of dietary compounds produces substances that can induce the generation of pTreg cells4,5. Thus, the researchers aimed to determine if these bile acid metabolites could impact immune responses.

Campbell et al. performed a screen of the major species of secondary bile acids from humans and mice to test if they impacted the generation of Treg cells in vitro. Dendritic cells (DC) and CD4+ T cells were co-cultured in suboptimal Treg-inducing conditions in the increasing presence of secondary bile acids in vitro. Two secondary bile acids, β-hydroxydeoxycholic acid (isoDCA) and ω-muricholic acid (ω-MCA) were identified as molecules with substantial Treg-inducing activity. Because isoDCA is found in substantial levels in the intestines of healthy humans and its biosynthesis is well characterized, the authors focused their subsequent experiments on the properties of isoDCA.

Bile acids interact with several receptors, including the farnesoid X receptor (FXR)6. By using FXR-deficient T cells in their co-culture system, the authors demonstrated that the effects of isoDCA did not directly affect T cells, but rather impacted DCs. They also showed that isoDCA does not signal through FXR but opposes other signals induced through this receptor, and isoDCA acts on DCs to decrease their immunostimulatory properties. Treatment of DCs with isoDCA led to a reduced expression of genes involved in antigen processing and presentation, pro-inflammatory responses and interferon signaling, and increased expression of genes associated with an anti-inflammatory state. These data suggest that isoDCA may act to antagonize FXR signaling, which contributes to the pTreg-inducing effects.

Use of Germ Free Mice to confirm in vitro findings

To confirm an in vivo role for isoDCA in inducing pTreg cells, Campbell et al. utilized a synthetic biology approach whereby they engineered strains of bacteria to produce isoDCA in mice. Germ-free mice were associated with these isoDCA-producing strains and the presence of pTreg cells was determined in the large intestine lamina propria. Similar to their in vitro results, significantly higher percentages of Foxp3+ Treg cells were recovered from the intestines of mice receiving bacterial strains producing isoDCA. Additional experiments using germ-free mice deficient in conserved non-coding sequences required for Treg differentiation demonstrated that the effects of isoDCA resulted in de novo generation of pTreg cells.

This elegant study is another example of an intricate biological system that has likely co-evolved between hosts and microbes over time. Commensal microbiota metabolize bile acids, which in turn induces regulatory T cell subsets that dampen immune responses against them. Understanding how this critical component of immune regulation arises may be important in the future development of therapies aimed at quelling inflammation.